To say that Mayhem makes a splash when entering a room is the understatement of 2020. Not only has Mayhem become a fan favorite on RuPaul’s Drag Race (Season 10), she has also dominated the social media scene with her signature wide eye pose becoming THE meme to fit any occasion. Most recently she made her triumphant return to the Work Room (p.s. why isn’t it called the Werk Room?) in this summer’s RuPaul’s Drag Race All Stars 5. Causing a little mayhem right off the bat, social media haters put her on blast for wearing an outfit that was bought off of Amazon for her big entrance. Amazon styled or not, she killed the look, and fans and fellow drag queens came to her defense with an outpouring of love. Mayhem took to social media and talked about the realities of doing drag, it’s not all glamour and glitz. Some times a designer will supply your look, sometimes you have to craft your own outfits, and sometimes you buy outfits online. Deal with it.

In addition to Drag Race, Mayhem has made appearances on BuzzFeed, Lip Synch Battle with Nene Leakes, Netflix’ Cherry Pop, Germany’s Next Top Model, music videos for Lizzo and Iggy Azeala, and featured in Women’s Wear Daily magazine, as well as produced her own single “Queen of the Party”.

In and out of drag, Mayhem is a cutie pie and has been sharing the lighter side of surviving quarantine through her ever-growing social media complete with in bed confessionals, in drag opinionated rants, and even the occasional booty flash. If that booty could talk.

Mayhem took off the lashes, put on some gloss, grabbed a cup of tea, and curled up with us for a fun, Andrew Christian exclusive chat. P.S. She spilled the tea everywhere. 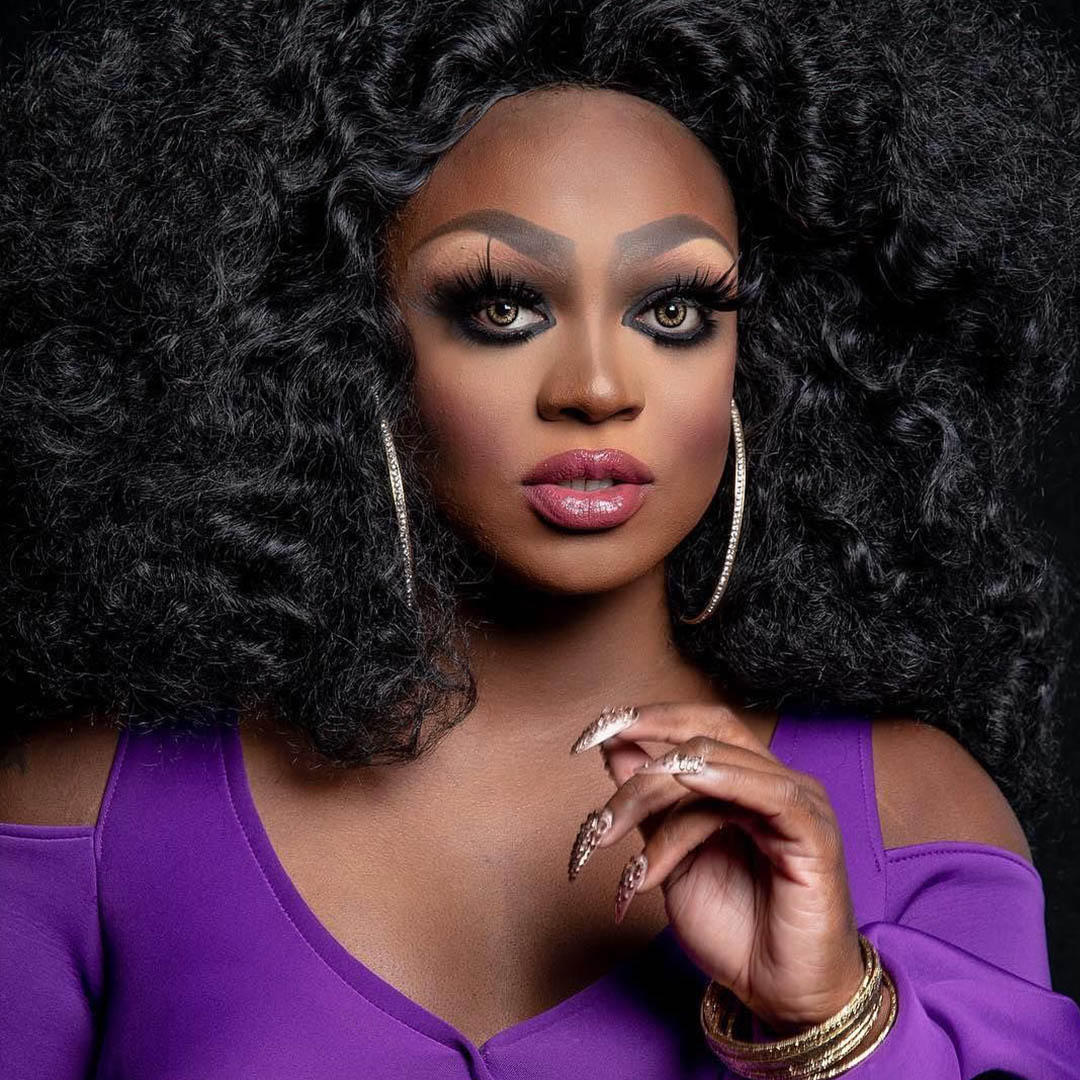 You have been back in the Drag Race Work Room as a consultant and special guest, but what was it like Day 1 back as a contestant for All Stars 5?

It was like being back home from a vacation 😂. Glad to be back and ready to get in your own bed hahaa. It was exciting to see what would come from this new experience

Who would you have sent home first?

Mariah. Because I had just seen her a couple of days before filming and she didn’t tell me she was going to be there lol.

You have created a meme and social media empire that is as successful as your Drag Race appearances, some Queens don't do so well with their personal brand after the show. What is your secret?

Thanks! I honestly don’t really pay attention to that aspect of my drag. Some queens, that’s the most important thing to them. Their “brand”. I’m just Mayhem and very easy going with everything. It’s organic and never forced. Maybe that’s why I’ve had success with it cuz people sense authenticity. Possibly, the ability to identify with someone who is at eye level rather than a queen who seems unattainable or grand has something to do with it as well.

What are the biggest mistakes Queens make on the competition?

Forgetting that it is a “reality” show in conjunction with a competition. Some queens forget to let your personality speak just as loud as your talent. I learned that after my first run on the show.

What did you think of this year's rule changes i.e. Lip Synch for your Legacy?

It was good...only if you were the winner that week lol. I’m a fan of lip-syncing for your life. It’s the sole opportunity that you get to save yourself and also show the audience how good of a performer you can be. It’s a chance to entertain on your terms and shine the way you know how.

How have your DMs changed the most from your appearance? Any funny/crazy DM stories?

Ummm...I’ve gotten more unsolicited nudes than ever before lol hahaha. I’ve been asked on more dates than ever before. And even a few marriage proposals. It’s all been quite flattering I must say. The attention from guys in that way has been overwhelming in a good way. I’m oblivious in recognizing if somebody is interested in me. So, having blatant advances is nice.

Who’s a Queen from the Drag Race family you wouldn't mind sharing your Quarantine Bed with?

Omg... can I pick more than one??? Cuz I have a Cal King bed and there’s plenty of room for multiple guest. Can I pick crew and tech from off the set? Cuz, baby, behind the scenes is where the real trade is at!!!

When you are looking for hook up, what's the first thing in a "date" you look for?

I’m actually not the “hookup” type of guy. I’m the guy who is waiting for the right guy to come along...not Mr. right now.

When you are looking for romance, what's the first thing in a date you look for?

Someone who has a sense of humor. Looks can only take you so far. I need someone who is just as hilarious and quick-witted as me to keep me interested. The lead up to sex and most importantly the follow up after is what’s most attractive about a person. Can you make me laugh and keep me engaged in conversation?

I don’t know about the bedroom...but back seat stories I definitely have plenty of those 😂

When you are casual around the house, boxers, briefs, or?

A slightly opened robe with nothing underneath. Comfort, classy and cheeky 😜

What would your design for an Andrew Christian pair of undies include?

Mesh. Lace. The suggestion of being able to see everything but tastefully is very sexy to me.