Posted on December 15, 2020 by Andrew Christian

It has been a wild ride for the self proclaimed Elephant Queen Eureka O’Hara and despite some bumps in the road, she’s here! Eureka became the first Queen in RuPaul’s Drag Race herstory to have to leave the show due to an injury during her brief time on Season 9 of. A torn ACL wouldn’t keep her down for long, as fans quickly rallied around her and her messages of body positivity. She popped up for Season 10 of Drag Race and finished in the top 3, alongside Aquaria and Kameron Michaels.

Eureka’s name was inspired by her mom’s first name and Scarlett O’Hara from Gone With the Wind. Eureka’s relationship with her mom was a big part of Eureka’s journey on Drag Race and fans became even closer to Eureka as she shared the news that her mom had passed away from Cancer in 2019.

Eureka has continued to use her fandom to inspire self-confidence, self-love, and inclusivity. As for pronouns? She uses them all. This last year, Eureka co-starred along fellow Drag Race alum Shangela and Bob the Drag Queen in the Emmy nominated HBO Max series We’re Here. Coming back for Season 2, We’re Here features the queens travelling across the US to small towns to put on a one-night only drag show with city residents with inspirational stories of their own. 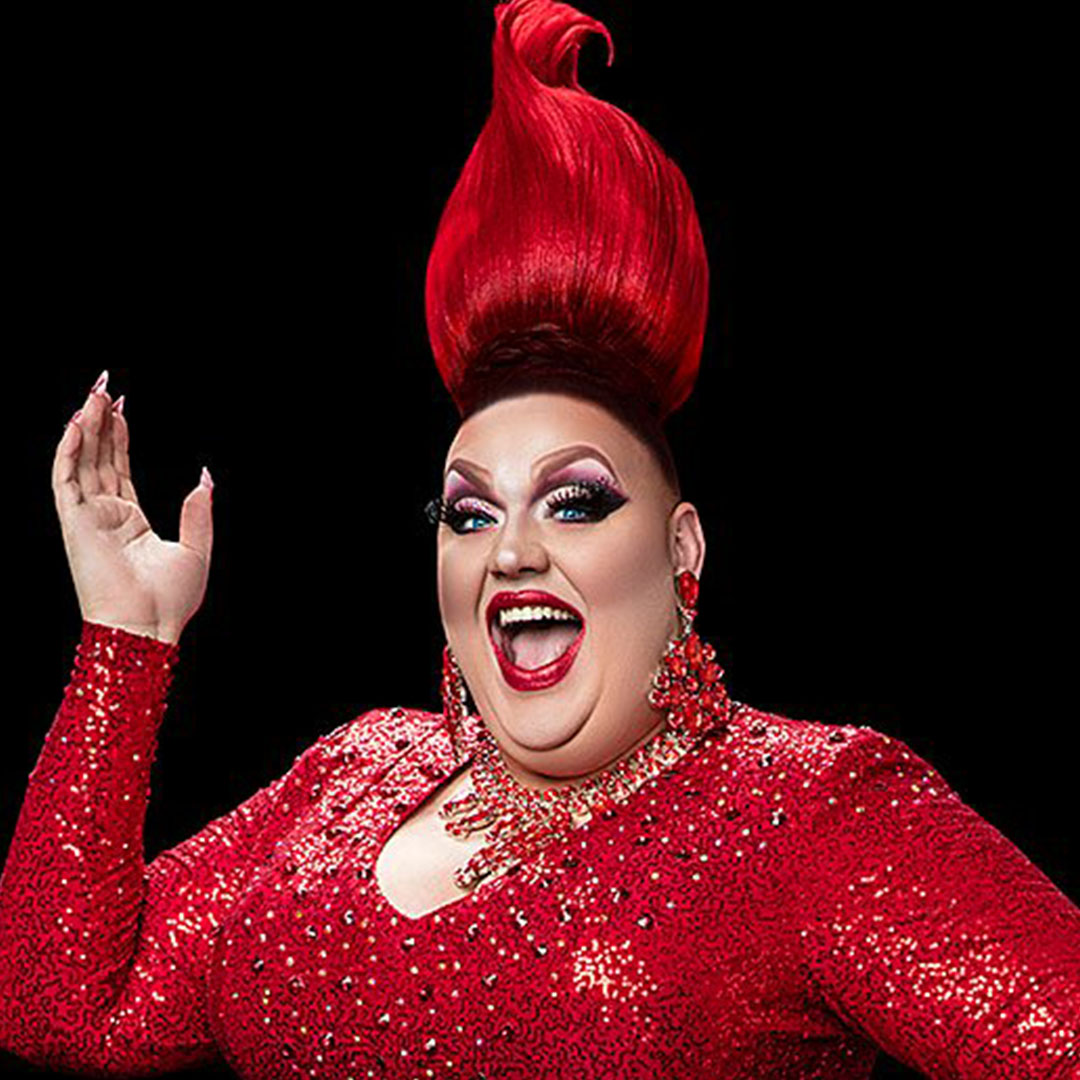 We chatted with Eureka about the future, nose hair trimmers, and worst dates:

What are your biggest hopes for the nation during these next four years?

That we can come together and that people will stop being ignorant about the rights and struggles of minorities.

How have you been keeping your sanity during COVID?

Bold of you to assume I’ve kept any of that. I’m kidding. I think I’ve just thrown myself into projects I’ve wanted to do for a long time. That and spending time with friends and family – even if it is virtually. My Zoom and FaceTime have skyrocketed!

You have filmed for Season 2 of We’re Here already, anything you can tell us about the 2nd season?

I have all the tea, but don’t tell anyone I told you. The first episode is going to be a tear-jerker and takes place in ….

How has We’re Here changed you differently than any other project you’ve done?

It’s allowed me to tap into myself in a new way. I’m able to connect with people on a real level in a way that allows us both to grow from the conversation. It’s actually been incredible for my spirit.

You have so many projects going on, do you think you’ll ever return to the Drag Race world?

It’s always a possibility. I love RuPaul and Drag Race and if they ask me to participate in something cool, I’d certainly give it thought!

What is the strangest thing you’ve bought online during COVID?

I may or may not have purchased a couch online, but is that really strange? Maybe nose hair trimmers. Mama’s gotta keep all these holes clean!

What celebrity would you want to give a drag makeover?

Drew Barrymore – I’m a huge fan and honestly it would just be an excuse to kiki with her!

What would the name of your biography be?

If someone wanted to win you over with their cooking skills, what would you challenge them to make?

Ketchup Meatloaf with a side of Mashed Potatoes.

He took us out to an awful restaurant, talked about drag the entire time and disparaged mine. He didn’t have enough to cover dinner, so I had to take care of it. By the end I told him I wasn’t interested in another date but wished him a good night. He then had the audacity to ask me if I wanted to give him head!

What do you have to say to members of the LGBT community who are not wearing masks?

Anyone not wearing a mask is literally putting every life they come in contact with at risk – I can’t respect someone who does that. If, after all this, someone still chooses to go maskless, they’re not someone I want in my community at all.

What reality TV shows are you watching?

I actually don’t watch a lot of reality TV. Although I have been watching The Face – I’m obsessed with Naomi Campbell on it!

Who is the biggest diva on set – you, Shangela, or Bob?

Shangela - but I’m trying to take that crown.

If you were to give RuPaul a challenge on Drag Race, what would it be?

Either the makeover challenge or Snatch Game.

What is your least favorite holiday song?

It’s a guilty pleasure and I hate it at the same time - All I Want for Christmas is You.

What celebrity would you most want to quarantine with?

Melissa McCarthy! She would be so fun!