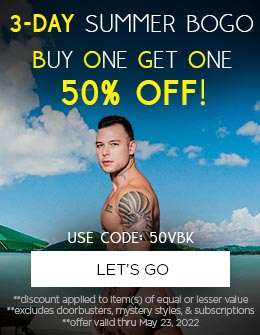 Is he taking it slow or just not that into me?

By Nicholas Velotta for Andrew Christian

It has become a true talent to know whether the guy you’re seeing is serious about dating you or just killing time. As with most innovations in dating culture, this has a good and a bad side to it. The good: you don’t have to prematurely jump into a relationship just to lock it down before someone else does. The bad: a lot of guys take advantage of the gray area between “friends” and “more than friends” just to keep a full social calendar.

Sooner or later though, you get tired of the chase. How many dates can you go on without a clue as to where things may—or may not—be heading? If you’re to believe TV dating tropes, three dates is the benchmark, or at least that’s when sex is supposed to occur (if not earlier). But what if sex hasn’t happened yet and it’s date number six? Or, what if sex has happened but you can’t get a read on how he feels? You still like the guy, but according to all your friends (both real and imaginary), he probably isn’t as into you as you are into him.

Is this where modern daters are stuck? We either have to bench a guy for not being interested enough or be his bench warmer until he finds someone better.

Hook-ups, dating apps, and casual sex have consumed much “traditional” dating’s appeal. Look back only a few years ago when taking it slow was a token of a healthy long-term relationship to-come. Now, when things are moving slowly, we assume the worst.

And yet, most of us still end up struggling to make sense of cool-to-start relationships. Shouldn’t we be sleeping together by now? Is he just looking for friendship? The modern dater is inundated with newfound angsts concerning courtship in the era of hook-ups. What was once excitement from mystery becomes anxiety from ambiguity.

“He brought his bestie with him on the second date,” my friend, Jake, explains, “she [the bestie] did all the talking and he never made room for one-on-one time with me.”

“Is that even a real date?” Jake asked. (He’s had a chronicle of dates gone cold over the past year, and at 27 he is looking for something serious as soon as possible.) After many a kiki with close friends and a few more dates with no spark, Jake’s faith in Mr. Bring-A-Friend-Along had waned. The two stayed friendly, but love, it seemed, was not in the cards.

Three weeks went by and Jake was still playing the field when Mr. Bring-A-Friend-Along sends a flirty invitation to meet up. Jake takes the bait and the two have been canoodling since. Jake’s wasn’t a problem of incompatibility; it was a problem of impatience.

Courtship is not dead. Rather, I’d argue, it has been ignored into near extinction. A whirlwind romance is such an intoxicating idea that we often forget real-world relationships take time to deepen. And while some of us can jump in right away—whether emotionally or physically—others need time to disclose their feelings and bodies.

WHEN TO PULL THE PLUG

On the other hand, a failure to launch can be more than a sign he’s taking things slow. There are usually indicators that a guy isn’t into you, but they can be subtle so let’s review some:

He doesn’t respond to your texts within 24 hours.

He pulls away when you try to be affectionate.

He often disagrees with your opinions and even argues with you on dates.

You rarely see each other outside of a group setting.

Compliments are few and far between.

There’s usually a convenient excuse as to why he can’t meet up with you.

He makes remarks about not being ready for a relationship or not “looking for anything serious.”

He doesn’t try to impress you.

You are always initiating conversations.

Sex is not occurring, or, sex is the only time you feel a connection to one another.

The other important thing to discuss here is initiation. Sometimes (and by that, I mean many times), people want the man to make a first move. When he doesn’t, they assume he isn’t interested. Of course, with gay guys this is less of a problem, BUT I’ve met quite a few gays who need to be pursued before they believe a guy is into them.

Playing with dominance and submission is hot and all, but if you’re so passive that a good guy slips through the cracks simply because neither of you makes a move, that’s unfortunate (for both of you). Dating is about taking a risk on someone and being vulnerable, so if you’re on a mission to find Mister Right you have to learn how to put your cards on the table and initiate romance.