With the weather getting colder, we could all use something thicker and burlier to cuddle up with. Enter Jack Dyer, ready to fulfill all your holiday daddy fantasies. Thick and tattooed with piercings (yes, even THAT is pierced), he puts any Sexy Santa to shame.

He retired after a relatively short time in the adult film business, but his films with Nasty Daddy and Icon Male are still in heavy circulation and quite popular for a variety of reasons. He covered everything naughty and nice with massage scenes all the way up to fetish and kink. He’s a Leather Man competitor and is currently involved in a throuple – that sells realty, no less!

We chatted with Jack about cake fucking and why he left the business – yeah, we said “cake fucking!” 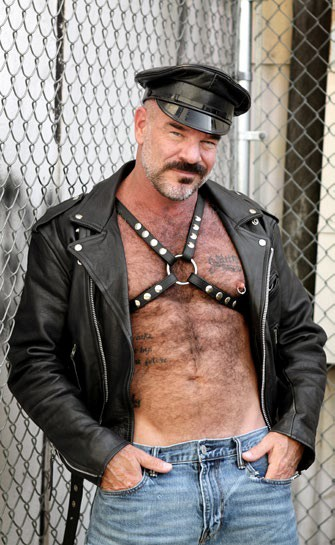 What made you retire from the business?

How has the adult industry changed the most from when you started, in your opinion.

Raw sex without shaming. Ah, those were the days! The porn of the ’70s and ’80s (pre-AIDS) was more authentic to what was happening in the gay cruise culture of the time. “Safe” sex wasn’t a thing. You had to actually get out of the house and talk to people if you had any chance of getting laid back then. It was far less anonymous than it is - or can be - today. Mostly because you might not get his name, but chances were pretty good that he lived in your neighborhood. And, sending a dick pic was a hell of a lot of work pre-cellphone. Now it’s pulling out your phone, log in to an app, share your dick pics, and order in from a banquet of options.

Would you ever return to the industry?

Perhaps, but likely not as a model. I have done some behind the scenes camera, lighting, and production work for Trenton Ducati and Rocco Steele. Just not my focus at the moment.

Looking back, what is a favorite memory from your adult film career?

I was shooting a scene with Scott Riley in “My Stepfather’s Stepfather” for IconMale directed by Chi Chi Larue. I was playing Scott’s grandfather (yes, grandfather- I know, it set me back a bit, too. LOL), and we were supposed to be cleaning up after my birthday party. One thing led to another and we started fucking on the sofa, as one does with their step-grandson. I looked over at the coffee table and asked the cameraman to cut. I told the production guys I was about to try something I could only do once, so keep the camera going. We got back into it and I pulled out, reached down, grabbed my birthday cake, and started fucking it. From a back room watching on a monitor, you can hear Ch iChi yelling “FUCK THE CAKE! FUCK THE CAKE!” I then went back to fucking Scott right after I told him that he was “going to need an insulin shot after this”. That was the day I transitioned from Dom-Porn-Daddy-Bear to the Lucy Arnaz of gay porn. To this day, Chi Chi and I still greet each other with “Fuck the cake!”

What was the hardest part of working in the industry?

What tips would you give for someone starting out in the industry?

Pay attention. Have a plan. Do your homework. Learn how to market yourself, since much of your time will be tracking down studio heads and getting your photos to them for consideration. It’s a ton of follow-up, having an agent will help to some degree. I found I worked more, relatively speaking, without an agent than I did when I had one. (Sorry, Howard.) Ask to shoot with guys who have a large online presence to help propel your own. Target as much diversity as possible, both in race and fetish, so you don’t get typecast. Be versatile. If you can top and bottom, that’s twice the possible work. And, producers love if you can do both since there are often production day changes when models can’t perform, so to speak, where you suddenly become much more valuable to the producer. Also, to be completely frank, clean out well, even if you are scheduled to top. Own as much of your own content as possible. Negotiate with studio work, to dual-release at least the trailers of your scenes on your own content sites. This is such an underutilized win-win for studios.

And another very big thing… you are going to lose friends and family. This is no joke. It will happen, big time. It was something I expected to some degree, but not to the level to which it actually happened. Be prepared to be uninvited to annual events, like birthdays and holidays. What stings the most is the extra guard given to children to keep them away from your life. Sure, you make a lot of new friends (some, even lasting) in your new role. But, none of them will be as deep and real as you were used to having. Fact. 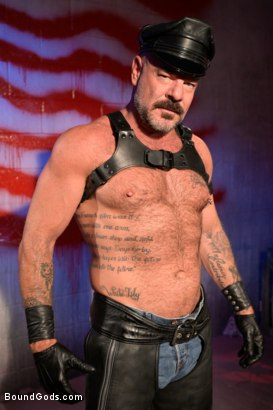 Has ageism in the LGBTQ community become less of an issue?

I think what you are getting at is, YES - Daddies are super hot. There is an incestual trend in porn, now, that lends itself to promoting the, let’s say, “value” of a mature lover. A little grey hair goes a very long way. As a community, with the now-widespread use of Prep, steroids, and medication cocktails, we are actually living longer and looking better doing it. We have Gilead to thank for the hot crop of daddies (and, granddaddies) out there. All in all, biases are regional. What is considered hot in West Hollywood is completely different from New York, or the mid-west, that has not changed.

What is love and dating for you like now?

My husband, Brenden (age 52) and I have been together since 2002. A year ago, we welcomed Stephen (age 32) into our relationship. Things are going really well with all of us and since my retirement last February, we have been in a poly-monogamist relationship. We intend to marry Stephen once it is legal. It was legal for a minute in Utah for polyamorous families to wed. It will be again, in our lifetimes. I look at it this way, interracial marriages used to be illegal. Society will evolve when relationships like ours become more mainstream.

What’s your favorite part about having sex?

You are Mr. Toolshed Leather 2020 – what was the competition experience like for you?

And, lest we forget, Mr. Palm Springs Leather 2020 First Runner Up, and Mr. Precinct Leather 2019, First Runner Up—always the bridesmaid, LOL. The competition itself is sort of, well, like a dirty beauty pageant. You present your looks and answer interview questions, just like any other pageant or competition. The biggest difference is what you do with your title. Yes, having a title is about community service, fundraising, etc. But it is really your choice, and once you’ve chosen it, it becomes the brand of your title year. For some, it's about sex. It’s about being at the top of the pile (so to speak). They might host sex parties, or club nights, to fulfill their service. For me, it was all about charity. (I didn’t feel like I needed to share any more sex since most of mine was available thanks to Google.)

What are the biggest misconceptions about the leather community?

I think I might have just answered that. It’s not ALL about sex. It’s also a brotherhood that tasks itself with bettering the community, both LGBTQ+, and otherwise. Leather is really hot, feels and looks great on most. And, it does a great deal of incredible work for the community, some you hear about, but mostly behind the scenes.

What does the future have in store for you?

Not exactly sure, but I hope to continue growing my business in real estate here in Palm Springs. www.3bearsrealty.com (Shameless plug.)

What kind of underwear do you wear on a regular, everyday basis?

Honestly, I have been a longtime fan of Andrew Christian underwear. And, he has always been a nice guy to me. His “Almost Naked” line has been a staple in our house since it launched. The package pocket in the front really works. As you can plainly see, I tend to hang a bit low. That technology brings everything up, front and center. Brilliant! We used to buy 20 at a time. The boys in his West Hollywood store would see us coming! Now living in Palm Springs, I rarely wear underwear anymore. And, since retirement, even less. It was always vintage jocks and Andrew Christian on the gogo box, though! Now, freeballing is the usual for me.

If you were to design a pair of Andrew Christian underwear what would they look like?

First, that would be awesome.

Second, they would have the feel of the Almost Naked fabric, the basket of the Massive series, likely a sheer as possible, and tagless. The waistband would be set low and would read “Jack Daddy”. Too specific? J

Though he’s retired from the business, you can still check out his hot content on his Twitter.