Posted on November 16, 2018 by Andrew Christian 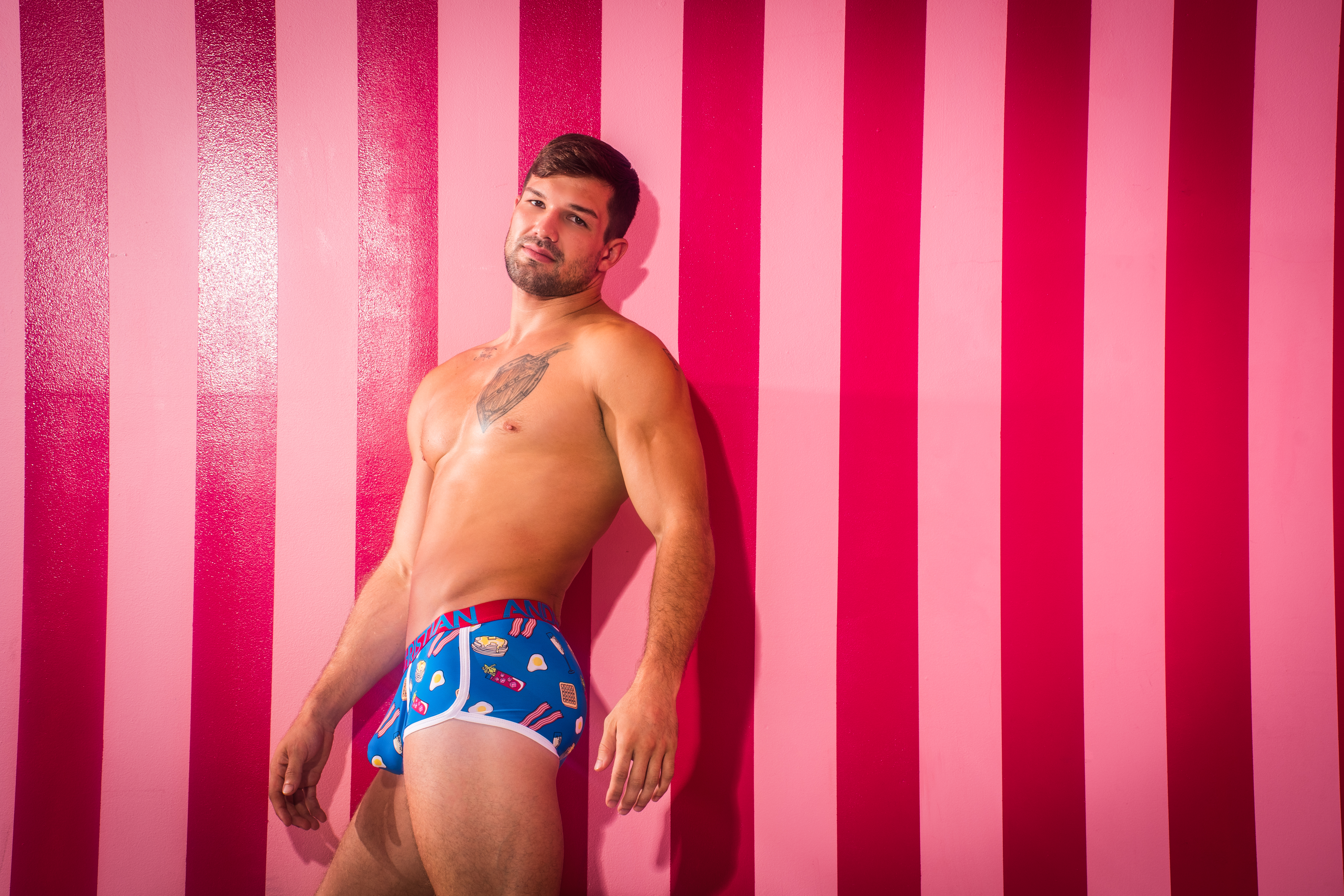 It was a regular day, and I was at the gym like I normally was. I was out-of-town so this wasn’t my home gym and I was unfamiliar with anyone there. A stranger if you will. This gym had four floors of facility and I spent most of my time where most of the other guys were -- the weight area. It was leg day and I had the shortest shorts on (because I don’t like feeling things on my legs) but I wasn’t conscious about it. At least not at first.

While I was on a rest period at the squat rack, I glanced over and saw this guy watching me. Of course, when I caught his eye, he looked away. My rest period was over and I went back in. I glanced back over, he looked away again. He was hot and I didn’t mind the attention plus we’d gotten dressed not far from one another in the locker room before working out, but I had to know if I was just imagining things. After my third set, I looked over and to where he was and he was gone. I walked over to the next machine, hip abductors, and sat down and started to work. 2nd set in, he sits right next to me. This time I look at him and smile. He returns the gesture. Throughout the rest of our workouts, you’d swear that we were in some kind of porn. The positions that we intentionally put ourselves in only egged the other on and I looked down and saw that my short shorts weren’t hiding much. Neither were his. His bulge was gorgeous and that outline looked like it could make me happy. I could tell he thought the same of mine.  I had to cut my workout short when I noticed that I’d been leaking precum through my jock. I looked over at him on his machine and he had his legs spread wide open and his bulge moved. I could see the head of his dick peeking from his shorts. It was glistening and all I could think about was tasting it. He was a precummer, too. Glad we had that in common. I was rock hard and knew that I needed to take care of it right then and there because my focus was somewhere else now so I headed to the locker room.

I grabbed my towel and started to head towards the shower, but took a detour to the steam room. He’d beaten me down there and motioned for me to come in. I did. We sat there sweating until we were alone, and once we were he walked out and held the door open a little longer. I knew what he wanted. This gym had many sections and places to get dressed. I followed him to a section that was virtually empty. He reached for my towel and got down on his knees and took my whole dick into his mouth like a fucking champ. He did this thing where my whole dick was swallowed and his tongue tickled my balls. I think he could feel me throbbing and shook his head no. He turned around and leaned his hands against the wall and tilted his ass up. I knew what he wanted and he knew that I wanted to give it to him. And I did. I fucked him bare in the locker room until I shot my load — a week-and-a-half of build up — deep inside of him. Once I came he pulled up his towel, kissed me deep and hard, and said thanks.

We never spoke a word. I don’t know his name. I still think about that day. This happened to me while I was in Spain.

I was on Grindr and I could only communicate on a datin app while I was there because I didn’t have an international plan. So I found this guy  -- let’s call him Pablo -- and we did the whole pic exchange and had a great conversation. He told me that there was a place called La Mariposa which was a sex club. I’m not a prude, but I’d never been to a sex club and didn’t really know what to expect but I figured I’ll be with someone (Pablo) and at the very least, I’d take a look around and if I was uncomfortable, I’d leave.

Pablo does show up and he’s more handsome in person. We walk in and there are men of all shapes and sizes around. There was porn playing all over the different screens. Solo stuff, public fucking, threesomes, orgies. It was kinda dark and my steps shortened and Pablo who somehow sensed my apprehension grabbed my hand and pulled me next to him then grabbed my face and kissed me. I was immediately more turned on than I’d been. We took a few steps further and saw a man on his knees giving a wet blow job to a guy and the way he was being face-fucked turned me on even more. Pablo and I eventually reached an area where there were more guys -- some fucking, some just enjoying the views and we turned the corner and saw the gloryhole section. Thoughts of the guy getting sucked out a few paces back made me so fucking excited that I could have spontaneously ejaculated. I didn’t. Instead, Pablo pulled me into the gloryhole room and stuck his cock through. I did the same. On the other side, there was a cum-hungry fucker sucking everyone off. Initially, he was “fair” and was giving everyone an equal amount of time. But on his third rotation around he spent some extra time on me. Pablo -- who’d had on an armband -- pulled out a bottle of poppers. I’d never tried them before, but I figured, my dick’s out and hard and being sucked by a velvet throat so...why not. I took two hits and the rush that I got was insane. I pulled my cock from out of the hole, walked around, and shoved my dick in his throat and fucked it hard until I shot it in his mouth. He looked up at me and saw that we had an audience. Another guy came in kissed him on the mouth and they passed my load back and forth. I use to go out in WeHo every night. I went out my friend Gina. She was a lesbian and I was gay and we decided to go out together. This particular night there was some kind of magic in the air because she found a girl that found her attractive. I found a guy that found me attractive and the four of us connected and danced together. We all left as a couple and Gina’s girl -- Megan -- said that she had a penthouse apartment not too far away and invited us over. I’m typically not an immediately go home with someone kinda guy, but like I said. There was magic in the air. So I went.

We all get there and the girls go to Megan’s room and I was in the living room with my boy -- Peter -- drinking wine. We start talking and then making out. His lips were perfect. It was a nice night so we take it out to the balcony. As we’re making out, hands start moving around and exploring. He wasn’t hard when I touched his dick, but that connect made that happen. The kissing gets stronger and harder and, honestly, being outside in the open air made it that much more exhilarating. I pulled back and looked at him and we both had the same thought without saying it. We ripped off each other’s clothes and he turned me around and started eating my ass. I’m vers, so I was game for whatever. I put one leg up on the chair to make sure his tongue was everywhere it wanted to be, and I gotta say that he knew what the hell he was doing. My hole was pulsing and dripping thanks to Peter. I suck his dick more to get him wet and turn back around. He had a condom so he put it on and slides every bit of his dick in. It wasn’t too big and it wasn’t too small. It was perfect. I could feel it throbbing in my hole and it turned me on even more. His hips were slapping against my ass and he held on to my waist for leverage. He said something but I couldn’t hear because I was too far gone and he was too far in.

I push him away from me and into a chair and straddle him. I sink down on his dick and that reentry was everything I needed it to be. I start bouncing and riding and he’s gripping my ass and shaking it like it was his. And it was. Then I feel myself getting close. I don’t say anything because my breathing would have pushed me to be too loud. I think he was going through the same thing because as soon as my load shot across that balcony on the wall, I could feel him throbbing inside of me.  He turned me around and giggled at the sight of my cum sliding down the wall and sucked the rest of it off. I returned the favor. We got dressed and -- again magical night -- the girls emerged from their room. It was time for me to leave Peter. We never finished our wine.

HAVE A HOT HOOKUP STORY WE SHOULD INCLUDE? REACH OUT TO SHAWN@ANDREWCHRISTIAN.COM TO BE FEATURED