Don’t let that innocent boy next door smile fool you, adult film star Max Adonis can get pretty naughty. Max has been in the adult industry for about two and a half years and has already worked with a lot of the bigger (pun intended) names in the biz. He is completely verse, but can clearly handle the bottom bunk with ease. He is a porn director’s dream – he’s extremely sex-positive and doesn’t have any issues standing at attention during filming. He has filmed a variety of scenes, often paired with more than one co-star – he always steals the scene. 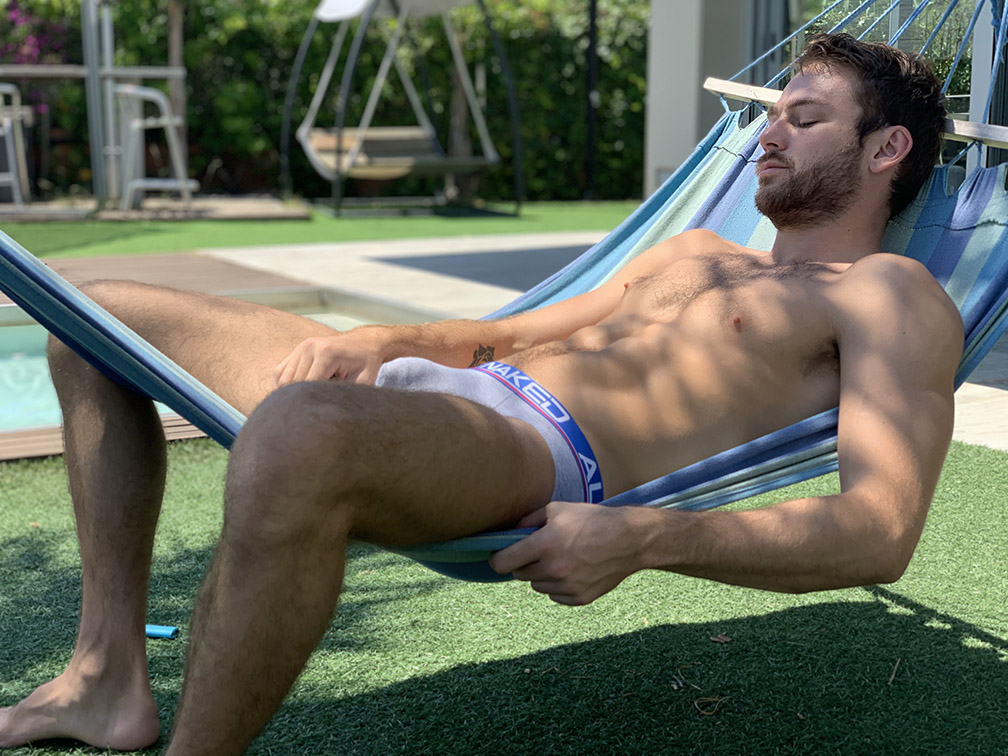 Right before I started porn I was really coming to terms with who I was in this world. “Max” happens to be my biological father's family name. It's a long story of family trauma and pain, honestly, and who has the time? I wanted to take ownership of that name and regain this power that I never knew I needed before. Lastly, I was inspired by the tale of Adonis in Greek mythology. I wanted to try to embody what he represented and immortalize it onto the camera. If you don’t know his story let me fill you in: He was a youth of remarkable beauty and the favorite lover of the goddess Aphrodite. He was so beautiful he drove her mad with jealousy and she killed his newest lover, Hippolytus. I've had some jealous exes in the past but, luckily, none as spiteful as Aphrodite.

Tell me about your first day ever on an adult film set:

Wow, that was a crazy day! I had just found out a week prior that I was scheduled to appear in two scenes in this upcoming movie; a working title for a certain studio, set to be filmed in San Francisco. I was so excited and had many wild ideas and anxieties come up, what I was in for? Shortly after I arrived, they picked us up from the hotel around noon. My costar had no idea who I was and actually assumed I was going to be the P.A. for the day. I didn’t feel like correcting him until the last minute when he was like, "when’s my scene partner going to arrive?!” Since we were the second scene shot that day, the first needed to be finished before we could begin. When we arrived to set, they made us wait in the driveway for the house (for what felt like forever). I started to wonder, will the neighbors notice? I've been in short films in the past and have been expected to kill time before. This time, knowing you're waiting on some guy trying to cum, makes for a funny first. The scene wasn’t that exciting, actually. I figured it might be easy enough since it was only supposed to be an oral scene. I googled the size of my costars cock beforehand, simply because I was curious. The rhino pill he took, however, wasn't working as effectively as he might have hoped. My preparedness for his alleged girth was to be in vain. Suddenly, to save time, the director was mediating the invisible script we were following. I wasn't having any issues with my boner, so instead the hunky pizza delivery boy was sucking my cock to pay for my pizza… the story didn’t matter they said… I didn’t argue. By the end of the day, and when the director called it a wrap, I exclaimed It was my first scene ever - they had no idea! You’d think they’d have briefed someone on set just in case the green newbie couldn’t hack it.

You are vegan, do you remember your last non-vegan meal? What made you become vegan?

I actually don’t remember my last non-vegan meal. I'm sure it was McDonald's, or something like that. It's actually going to be my 5th-year vegan-anniversary. Thank you, you’re welcome. I truly am superior. LOL. I’m only kidding. That is the running stereotype though. I am grateful that I made the switch and it's rare that you meet someone who’s truly vegan say I miss steak. Sure it tasted amazing, but I didn’t stop eating it because I thought it tasted bad. I watched where my food actually comes from. I watched what others have deemed inappropriate for their eyes but perfectly acceptable for their stomachs. I asked myself what was I afraid of? Why was I scared to watch a documentary like The Game Changers or Cowspiracy. Now I feel more connected to my spirit, this planet, and others around me by simply changing a few old habits concerning what I eat or buy.

What are the biggest misconceptions about adult film stars?

The biggest misconception is that we are all the same! We aren’t!

What are your favorite types of scenes to film?

A scene that's a part of a bigger story. Preferably a hung plot with a massive climax. I want to feel like I'm really creating something solid. A hotel plow scene is great, but I appreciate a script more than anything.

You are verse, what would you do if you were in a relationship with a top or bottom-only?

My dream would be a fully verse/ top leaning guy. I don’t want to worry about one area being off-limits. When I'm in the moment, I want it all!

Who in the industry would you love to work with whom you haven’t yet, why?

There are tons of guys I haven’t worked with yet and I blame the studios. They can’t keep up. Boys I’ve been talking to and it's frankly long overdue. Diego Sans, Max Konnor, Rocco Steele, Antonio Biaggi, Tim Kruger, to name a few. Hopefully, things will pick back up soon.

I'm trying to focus on myself a lot right now. I think self-love is the most important relationship to work on. Plus, it's not easy to meet someone who can handle this sort of baggage, haha. When the time is right, he will come along and appreciate my affection. 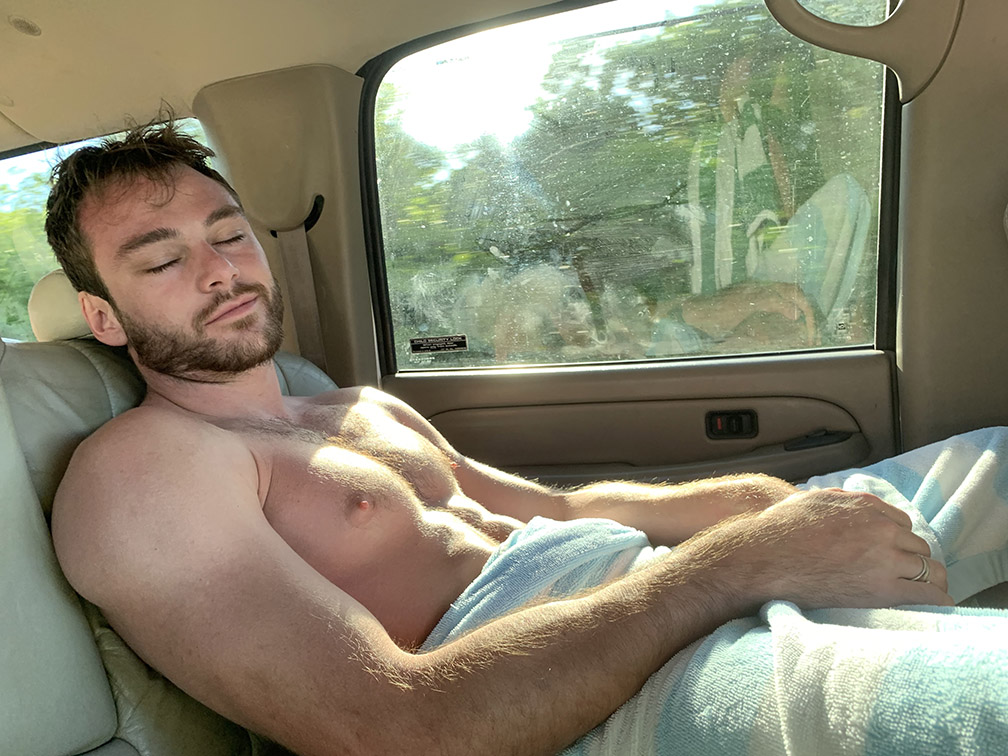 Biggest pet peeve while on set:

I think it depends on the studio you work for. I never want to go to set with a high expectation, just a positive intention.

Favorite part of the day when filming:

My favorite part is when the director calls “action!”, I'm unzipping my costars fly, or we’re kissing and it finally hits me - "oh we’re about to fuck!"

How have you been surviving COVID?

Following social distancing guidelines and wearing a mask. I am helping out at home now and fortunate to be around family.

I enjoy both for different reasons! Studio work introduces me to new audiences and challenges me to try new things. JFF allows me to connect better with my “fans” and allows me to show a more personal side to my porn. I knew I had to do both, I think you truly learn the stock of a performer by his ability to relinquish control to a director like that. When you’re on studio time they expect a great deal from you, and you must be able to perform with all that extra pressure put upon you. When you’re filming at home alone in your bathroom it's just, different. https://justfor.fans/Maxadonisxxx

What do you look for most in a scene partner when creating your own content?

I look for a mutual interest. I want to make sure we both are gonna have a good time. My advice for anyone reading this that is a new performer, never beg a guy to work with you. If you feel like you need to "pin him down", it's probably not going to happen. I wish I learned that earlier.

What’s a talent or hobby you have that we would be surprised to find out?

You might be surprised to learn I love to swim and sing (not at the same time lol). I learned that the intense cardio training from swimming helps your ability to hold a note when you’re (dry)singing. Who loves karaoke? I do!

I love boxer briefs but with extra room for the bulge. I want to feel like I’m slipping my cock and balls into a big sock, with enough room so they can breathe and flop around. When I workout I want the sweat to create its own musky atmosphere. Two tones of gray for the fabric. A black waistband, and perhaps neon threading throughout. That would be awesome!