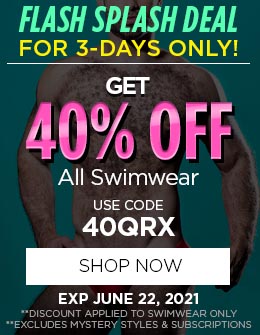 Why Are Haters Always Reporting Hot, Beautiful Pics on Instagram?

Of all the apps out there serving us constant eye-candy on the regular, Instagram seems to satisfy our sweet tooth the most. It’s instant, super interactive, and now contains cool features like Instagram Stories, IGTV, a better DM system, and a content search section. The possibilities of discovery have become endless. Plus, the hashtag fever of Man Crush Mondays and the glorious peach-emoji worship spurring from Wednesday’s hump day and Sunday Bumday has satisfied our very souls to last a lifetime. But there’s just one faux pas that’s been bugging the living hell out of so many users. You might know a thing or two about it. It’s the pesky inhabitants of the Net that constantly troll hot guys' accounts, relentlessly seeking to report anything they consider foul, objective, offensive or repulsive, especially when the picture they find to be repugnant is simply a work of art. That’s right. We’re talking about the war on sexy pictures.

And it’s becoming a major problem.

“So my post from this morning was deleted, wrote NYC-based choreographer and dancer Richard S. on his Instagram handle of Theonlyjmv. “Someone reported it when it was blurred and wasn’t sexual at all. What’s sad is that people cannot appreciate a photo.” In a screengrab, theonlyjmv showed the Community Guidelines given to him from the rule book at Instagram, which states that “We remove photos, videos and some digitally-created content that show sexual intercourse, genitals, and close-ups of fully-nude buttocks.” The picture in question actually showed the acrobatic stud covering up his genitals; no nudity was visible.

In early August, Dane chimed in with an update on the situation, stating “I won’t get a new one anytime soon, mostly because I can’t. Somehow, my IG has blocked my phone and computer from not only logging into any account, but I’m also barred from creating a new account altogether.” His page was eventually restored weeks later, giving sweet relief to thousands of his followers. But after a couple of weeks, it disappeared again. This time, it was banished along with the IG account of Cockyboys CEO Jake Jaxson. On Twitter, Cane responded to the online savagery: “And two days ago my Instagram was also disabled…again. It’s a conspiracy.”

And so many others can relate. Like once-retired Aussie porn star Tate Ryder, who has resurrected on social media recently. He was flagged for a post, causing him to bark at Community Guidelines (“I have some haters out there. You’re either jealous or got a small fucking dick,” he wrote). Drag star Willam Belli was also hit with a red flag. “Hey Instagram, there was no violation,” Belli wrote on an IG post with a snapshot of the now-familiar Community Guidelines rules and the removed pic featuring the Drag Race alum posing with a nipple-exposed male dressed in halfway drag.

This is an everyday headache for some folk, this constant policing of body imagery. And that’s because the lanes in our social communities are bombarded with people who object to the art of carnality. And they probably are scorned with raging bitterness and jealousy. Now if you’ve noticed lately, there seems to be some obvious double standard in place if you happen to be a global superstar like Kim K. Her ass is usually out for the whole wide world to see, but if you’re a man and gay and aren’t in the high-profile money-making bracket, you get severely punished, placed in Facebook-Instagram jail or your account can be totally deleted. I’ve seen total accounts washed away completely over such nonsense; some have even created new accounts or deleted entire Instagram accounts completely while focusing on the more relaxed universes of Twitter and Tumblr.

Firstly, why are these overly-sensitive folk following such profiles in the first place? If they totally object to such activity and are so tired of seeing hypersexual posts, all they need to do is unfollow and move on. But their internal disdain for outer beauty seems to be getting the best of them, ultimately putting a strain on the lives of happy self-confident individuals while being the ultimate party pooper for us all. And it is crystal clear that a large number of complaints are not being made by sensitive holy rollers or Negative Nancys. Nah, more like Bitter Bettys.

So what can we do to combat this behavior in the meantime? Well, let’s start by encouraging one another to celebrate the body more. Body positivity is good. If done right, it’s nothing to be ashamed of. ESPN does it annually with their Body Issue. Why can’t we do it on a daily basis? And since Instagram is the leading app for photography heads, why not show off those curves, abs and lewks on there? Sure, some people abuse the rules, but in most of these reported instances, it’s mostly a lot of overreacting happening. So until the staffers at Instagram rectify the hostile reinforcement of their rule book and those pesky haters discover a new hobby, let us continue to celebrate the beauty. Things might not improve anytime soon, but the best way to get over these bumps in the road is to keep persevering. We’re gay and queer and beautiful, and we’re not going to let these haters ruin our party. Not today and not tomorrow. In the words of Latrice Royale, tell ‘em to eat it and excuse the beauty.